Virtual Reality has many uses as we've all recognized through this class. VR can be fun, immersive, and educational. I'm going to talk about the medical aspects of Virtual Reality. I am going to specifically speak about a few studies that have shown the use of Virtual Reality technology in the treatment of anxiety, PTSD, and other psychiatric disorders. I chose this topic because I really think VR as a technoloy can be used in a host of different ways and a significant amount of people are walking around with PTSD or anxiety who could really get help from VR therapy. Part of the reason I took this course was because I was interested in what VR could be used for in all sorts of fields.

One great advantage that the medium of virtual reality has in the treatment of PTSD is that we are able to recreate situations similar to the source of PTSD to let these people confront their stresses in a safe and supportive environment. Being able to give exposure therapy in a therapists office is extremely advantageous to treating post traumatic stress. "One of the most common complaints of Vietnam Veterans with PTSD is a strong emotional response to the sound of helicopters. The American Lake VAMC PTSD program used "helicopter ride therapy" for several years as a regular part of treatment. The authors reported that this type of a exposure treament was very helpful their patients. However, it is not practical to use actual Huey helicopters for the thousands of veterans with PTSD."(Ref 1) You can see here how it would be much easier to treat these people with immersive VR therapy than spending the money it would cost to let these people fly in real helicopters. There are also studies currently underfoot examing helping survivors of sexual assault unlock their memories and work through feelings and axiety by creating environments and scenarios that let them interface with their fears in safe space. This is an approach to exposure therapy that usually would not be possible, you can't have someone play an assailant and it may not be best to bring them to the actual place, but having a similar virtual reality environment while being safe and supported could help them deal with their trauma. It is still reccomended to take PTSD medication and go through other channels of therapy, but there is research showing a positive effect by also including VRT (VR Training) with the other forms of treatment. 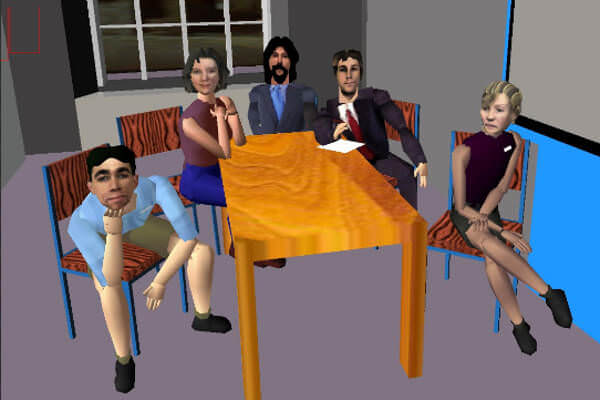 Anxiety is a disorder that effects about 18.1% of adults in the United States. - (National Institute of Mental Health (NIMH)) Estimates show that it may be higher as many people do not seek help, are misdiagnosed, or possibly don't even know that they are suffering with anxiety. With this being the case we should really be putting more efforts towards treating this, and it seems VRT may be helpful for people living with anxiety. As I was already getting at in the last part, we are able to use VR to simulate environments that are helpful to those who are suffering.

People with social anxiety can go through virtual experiences of common social situations, by being immersed in these low risk (as it is virtual) high stresss social scenarios, these people may feel more equipped to deal with these scenarios when they come up in real life becuase of their experience through the virtual reality therapy sessions.

Specific Phobia (SP) is an issue where people have some specific fear which causes great anxiety. One SP that is incredibly common is fear of flight. "Two studies on fear of flying using a within-group design have demonstrated significant reductions in flight-related anxiety as well as an increased likelihood to fly on an airplane following treatment."(Ref 2) As is the common theme with VR therapy, VR lets us model things like SP (animals, flight, needles, blood, etc) and lets those who suffer interface with those phobias in a place where they know they are safe and know there is no real threat.

Another type of anxiety that VR is particularly great to deal with is Panic Disorder and Agoraphobia (PDA). PDA is characterized by a sudden rush of anxiety manifested by phsiological and cognitive symptoms. Certain areas that commonly elicit panic attacks are parking lots, city squares, highways and tunnels. Modeling these areas and letting a user safely interact with them has shown to have some positive effects. " Early data making use of multiple-baseline designs found initial support for the use of VR in treating PDA." (Ref 2)

As I was talking about in the beginning I really do see great potential in solving some of these issues using Virtual Reality. If you are interested in some of the preliminary data (as this is a pretty new topic) I would recommend reading the study I linked as reference 2, it is very enlightening and easy to ready. There are so many people suffering, and though VR is quite expensive still (at least at the personal level) I truly think it will be a useful and integral part of a lot of people's healing. As a programmer in my personal experience, school work / an internship I've done a lot of projects that are interesting but not contributing to making the world a better place. I deeply care about mental health for humans, and I would be quite interested in this technology of helping people with virtual reality. I feel like the thing holding this field back most is the lack of research around this subject. The sources I linked are interesting and useful, but I feel like there isn't enough data out there to convince more therapists to explore this route. As time goes on and more developers develop for this and more studies come out showing what the early studies do in a broader circumstance I forsee this being a very common and useful type of therapy. While the price of VR is pretty high at the personal consumer level, in the grand scheme of things as a part of exposure therapy, this will be a significantly cheaper option and a lot more applicable to a lot of peoples lives.